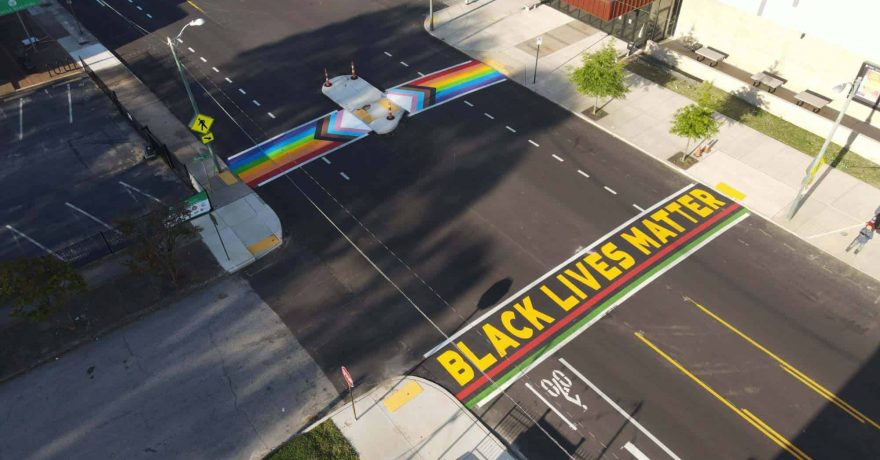 “Love is Love” and “Black Lives Matter” are three-word phrases that were visually realized this past Saturday, April 17, on Cooper Street near Overton Square where two crosswalks were installed: one for the Black Lives Matter movement and the other, an Inclusive Rainbow Flag Crosswalk in support of the LGBT+ community.

Ray Rico, owner of Ray Rico Freelance (RRF) and publisher of Focus Mid-South, an LGBT and allies publication, led the team that proposed the project. It won approval from the City of Memphis’ Public Art Review Committee in early January 2021 and a hands-down ‘Go for it’ from businesses near the project.

“I’m proud that our community will have both of these installations to show solidarity for our BIPOC and inclusivity for our LGBT+ family,” Rico said. “Now more than ever, diversity and equality are vital. Thanks to Linda Sowell, Shelly Rainwater, and the whole team’s vision for funding this effort.”

Linda Sowell, Principal Broker and Owner of Sowell Realtors, serves as an ally on several boards serving the LGBT+ community. Sowell and her company’s agents are the funding source for the two projects. Linda Sowell, a Memphis native, has more than 40 years of experience in real estate in the greater Memphis area.

“As a proud member of Midtown, our company wanted to show our support for the LGBTQ community and the BLM movement,” Sowell said. “The beautiful crosswalks between our office and Hattiloo Theater are a wonderful representation of the connection we all have to this community and to each other.”

The two crosswalks are east-west spans across Cooper Street. The Black Lives Matter (BLM) crosswalk is an “inspirational display designed to show solidarity and support for the African American community and their allies.” The BLM crosswalk reaches from the entrance area of Hattiloo Theatre, whose work is primarily of African-American influence, across Cooper Street to the south sidewalk along Monroe Avenue. The Memphis BLM crosswalk is the first of its kind in Tennessee.

The Inclusive Rainbow Flag Crosswalk spans Cooper Street from the northern corner of the Hattiloo property across Cooper to the north sidewalk along Monroe Avenue. The Rainbow Crosswalk is a colorful representation of a unified LGBT+ community.

The owners of businesses adjacent to the project agreed that the crosswalks are a good addition to Overton Square, Rico said. The crosswalks will attract and draw in more visitors who will take photos and share their experiences in the area. The art installation’s positive message, he said, shows diversity, inclusivity, and equality and provides a nod at acceptance for Memphis.

Both Sowell and Rico worked closely to get community leaders’ input and bridge some gaps in communication. This has established lines of communication and allowed a stronger bond between all community partners involved such as the local Black Lives Matter chapter, OUTMemphis, Mid-South Pride, Tri-State Black Pride, Focus Mid-South magazine, The Unleashed Voice Magazine, and other thought leaders.

Volunteers from Ray Rico Freelance, Sowell Realtors, the Black Lives Matter Memphis chapter and Mid-South Pride, as well as Memphis Commissioner Reginald Milton, were all on hand to install the crosswalks.

Rico would like to offer a special thanks to the event-day participants, as well as the Memphis Police Department.